Orchard Chiropractics & Martial Arts tasked Strata with renovating their commercial building to house a chiropractic clinic in the front and a two-room martial arts studio in the back. 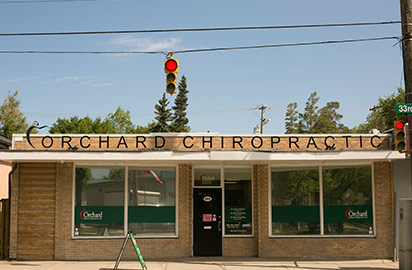 Strata designed and built adjoining interior spaces at 404 33rd Street West for a client with two businesses: a 1,150 square foot chiropractic clinic at the front of the building, and a 2,500 square foot martial arts studio at the back. Structural reinforcing was also undertaken should the owner ever want to add a second storey for further development.

Plywood was used for walls and floors at the martial arts studio, for both its aesthetic and its ability to withstand the abuse planned for it. Other atypical elements that were conceived and constructed for this space include a platform of raised tatami mats, an obstacle course of removable training posts, a custom-built stall ladder and chin bar, and an I-beam-mounted rolling punching bag system. More traditional finishes were used at the clinic, which includes four treatment rooms, reception, a universally accessible washroom, and office spaces.